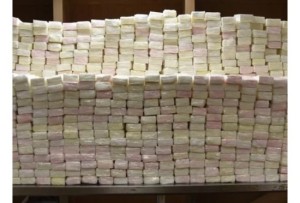 The seizure occured last week friday at the Laredo-Colombia Solidarity International Bridge, which runs over the border between the U.S. and Mexico and is a surveillance point for border patrol agents stationed in Laredo. According to the bureau.

Officers found more than 1,500 pounds of cocaine in 2,000 packs inside the truck, purportedly carrying a large shipment of baby wipes, when the vehicle was referred for a second inspection as it entered Laredo.

In a statement published with CBP’s news release, “This seizure is a prime example of border security management and how it helps prevent dangerous narcotics from reaching our communities,” he added.

The agency says the estimated street value of the seized cocaine totaled more than $11.8million.