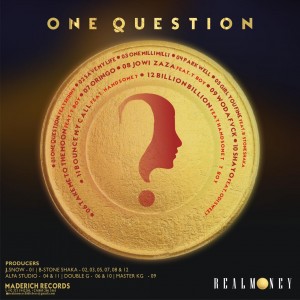 Renowned International Realmoney releases his sophomore album titled “ONE QUESTION” today, November 29, 2021. This is coming in after the success of the project’s lead singles; ‘Woda Fvck’

Since emerging in the early 2010s with his maximal interpretation of Afropop that weaved together R&B, hip-hop, and dancehall influences, Realmoney has had a constant presence at the forefront of the genre’s vaunt to global popularity, while trying to imbue popular music from west Africa with his more experimental ideas.

The Pakistan-based artist pairs his technical virtuosity with hit-making gravitas.

This studio album from Realmoney is a blend of Afro-pop, Afro-Rap, Highlife, and hip-hop. Something to Live For consist of 12 tracks and features artistes; Tboy, Skinny, B Stone Shaka, Handsome T.