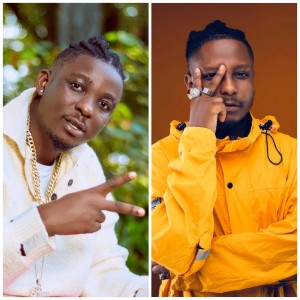 It is said that whenever music stars are seen together, something big is about to happen.

This is the reason Ghanaian superstar Kelvyn Brown popularly known as Kelvynboy who was recently spotted around Jamestown, Accra with rising Nigerian superstar Mr Purplemusik, is sending all the positive vibe that something big is cooking behind the scene.

Godwin Akeh, also known as Purplemusik who was a civil engineering graduate from Delta State some years ago didn’t know in a few years he would own a Record Label “Purple Musik World” and be touring around the world with his music.

Purplemusik has been on the move since his first single “For You” produced by Mix Master Garzy and video hit the screens of West Africa and touched parts of the world.

His recent tours which may be to discover new sound must have brought him to the shores of Ghana.

Also seen in the company of Mr Purplemusik are notable sensations in the Ghana entertainment industry, like Dancegod Lloyd and his manager Quabbles

Ooni of Ife celebrates daughter he had when he was 19