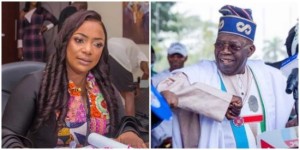 Nigerians have reacted to the statement made by the actress, Bimbo Akintola, endorsing the All Progressives Congress (APC), Bola Ahmed Tinubu.

Recall that the actress while speaking during an interview with Your View, a TVC programme, disclosed that Tinubu has helped and built talents in Nigeria.

Her statement sparked a lot of reactions, as some Nigerians took to their Twitter account to express their displeasure.

@crownsAffairs wrote, “Dude has been giving favours for years, not because he liked them then, but because he had an endgame… unfortunately, he aged terribly and cannot abort the mission now, cos he has invested all his life on it. Now they want Nigerians to pay the price for his years of investment.”

@ShwagDr wrote, “We want our economy to be rebuilt, not our talent. PO fit sha open talent ministry and make him the minister. Make him utilize him talent to the fullness.”

@DebonairDoc wrote, “Let her send her children to him so their talent will be built. We’ll pass.”

@Ucheychyto wrote, “We neither need a charity Organisation nor a talent coach. What we need now is someone to fix Nigeria. We need to get out of this mess.”

@zikikokwu24 wrote, “Why is it that it’s only Yoruba celebrities that usually testify about acclaimed goodness of Tinubu, does it mean there are no other tribes in the entertainment industry or residing in Tinubu’s Lagos. You
see that thing called “Tribal Sentiments” it has destroyed our social fabric.”

@AyodejiJoda wrote, “He knows how to put people in political position with his own personal and selfish ambitious. Now it’s time for them to pay back. Abeg all those he has helped should go and settle him.”

Related Topics:Bimbo Akintola
Up Next

I Was Pregnant 3 Times For Apostle Suleman – Halima Abubakar