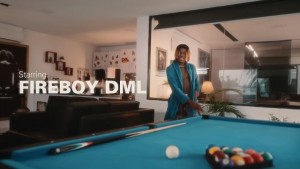 Fireboy DML returns to your TV screen this summer with a stunning visual to his previously released song “Lifestyle”.

The impressive record, “Lifestyle” has dominated the clubs and parties lately been included on Fireboy’s most recent project, “Apollo” album.

A Clarence A. Peters Film directed video relates to the song. The crispy video starred his friend, Cheque. Recall, Cheque and Demola got a masterpiece “History“.

Few weeks ago, Fireboy announced his endorsement deal with Monster Energy and he has previously hinted on his forthcoming project.

In addition, “Apollo” album serves as Fireboy’s second studio project; a follow-up to his debut, “Laughter, Tears and Goosebumps”.

Watch the video below