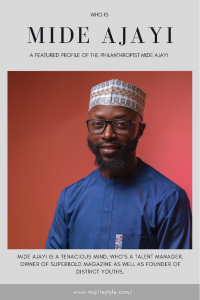 Mide Ajayi is a tenacious mind, a unique creative who’s ambitious, God fearing and kind. Besides his interesting personality,

Mide Ajayi is a talent manager with a daring sense of humor and the owner of Superbold magazine as well as founder of District Youths.

He is the second son of a family of 7 from the western part of Nigeria, that is very passionate about giving back to the society and creating opportunities for others around him to thrive; hence the vision behind his latest project- District Youth.

District Youth is an initiative set to create platforms, opportunities that will inspire and connect the visionary youth on a journey of self discovery and personal development built with acquired skills that will prepare the youths for the future.

When asked; what made you start District Youth?

“Growing up, I saw episodes where people around me wanted to learn a skill but were unable to afford it, because the cost of learning the skill was almost as much as what the families needed for support. That broke my heart even more…

So when I was in ss2, I thought to myself;

I want to be my own boss.

And I began to actively seek out opportunities that would enable me achieve this goal, eventually I graduated high school and got admitted into higher institution.

As we all know, the Nigerian educational system isn’t such a firm one and we had to deal with a lot of strikes while in school, during that infamous 6 months strike,

I got myself into working with different people in the industry which gave me a lot of platforms to start my career and Superbold professionally.

“I believe the youths hold the key to unlocking Nigeria’s economic potential and that is why I created this initiative District Youth so Youths can connect, network, be inspired and motivated to be the change they wish to see in their future. And this is not a task for only one man or a handful, it is a collective effort.

Therefore I urge everyone who has the capability to make this platform thrive to join me and make the youths great again.

Quickie: Incase you missed our last blogpost, you can catch up here.

Related Topics:who is Mide ajayi
Up Next 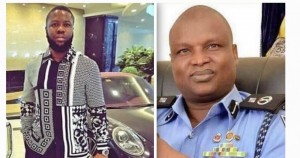 Hushpuppi, who pleaded guilty to various charges, including money laundering, wire fraud, and felony, among others, had said he used Kyari, a leader of the Inspector-General of Police’s Intelligence Response Team, to jail a fellow fraudster Kelly Chibuzor Vincent after both were locked in a dispute presumably over how to share the $1.1million loot received from the Qatari businessperson.

Vincent subsequently contacted the victim and informed them that they were being scammed by a syndicate involving him and Abbas, a US court document read.

Reacting in a Facebook post on Thursday, Kyari said he only assisted Hushpuppi to get native clothes and caps worth N300,000.

The police boss, however, admitted arresting Vincent but claimed he was released on bail to go and was not taken to any jail.

He wrote, “Friends; Abbas, who we later came to know as Hushpuppi, called our office about two years ago that somebody in Nigeria seriously threatened to kill his family here in Nigeria and he sent the person’s phone number and pleaded we take action before the person attacks (sic) his family.

“We traced and arrested the suspect and after investigations we discovered there wasn’t an actual threat to anyone’s life and they are long-time friends who have (sic) money issues between them. Hence, we released the suspect on bail to go and he was not taken to any jail.

“Nobody demanded for a kobo from Abbas Hushpuppi. Our focus was to save people’s lives that were purported to have been threatened.

“Nobody demanded any money from Abbas Hushpuppi and nobody collected any money from him. We responded to a distress call he made on threat to his family and released the suspect when we discovered there was no life threat from the suspect. This is the true story. Vincent is alive; he can be contacted.

“For those who are celebrating that this is an indictment on us and mentioning some fictitious big money, they will be disappointed once again as our hands are clean and our record of service for two decades is open for everybody to see. They will continue seeing us serving our father land and we will continue responding to all distress calls from all Nigerians provided they are life threatening.”

SaharaReporters had earlier reported how Hushpuppi, who recently pleaded guilty in the United States, narrated how he bribed Kyari according to court documents.

US Officials said in court filings that Abbas disclosed during interrogation that he paid bribes to Nigeria’s police chief, Kyari, to have one of his rivals arrested and jailed in Nigeria following a dispute over a $1.1million dupe of a Qatari businessperson.

Abbas had asked Kyari to arrest and jail a fellow fraudster Kelly Chibuzor Vincent after both were locked in a dispute presumably over how to share the $1.1million loot received from the Qatari businessperson. 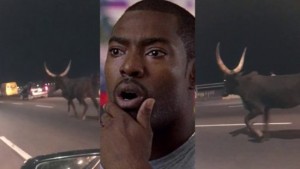 The cow was seen running while motorists were plying the road. A commuter who was on the bridge recorded the cow running and shared the video online.

Watch the video below. 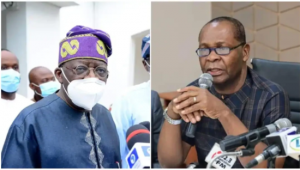 Special Adviser to Lagos Governor on Drainage and Water Resources, Joe Igbokwe has claimed that former Lagos state governor and the current National Leader of All Progressives Party, (APC) Asiwaju Bola Tinubu, has transformed many Igbos and other tribes into billionaires when he advised them to buy properties in the Lekki area of the state when it was still virgin land.

Igbokwe who is a chieftain in APC, shared this thought in a post shared on his Facebook page titled ‘How Asiwaju BAT created many Igbo billionaires in Lekki Corridor Lagos’. His post reads;

”In those days LEKKI Corridor was begging for attention. Nobody saw the potentials of that investment hub. Nobody thought LEKKI will be what it is today.

ASIWAJU saw the real potentials and began to speak to some people to take a look at that side of Lagos and invest there for tomorrow. ASIWAJU spoke to some of his Igbo friends in Lagos and told them that LEKKI will be the new Lagos anytime soon.

He told them: “If you have the money go and buy property there and you will not regret it”. ASIWAJU knows what he is talking about because he, himself has been a real estate guru for years.

Those Igbo boys and other Nigerians who took his advice are smiling big time today. They are big time multi billionaires and their property keeps appreciating everyday .

ASIWAJU BAT sees tomorrow. He sees what others cannot see. He plans ahead . He sows the seed. He keeps his friends and his head when others are losing theirs. He loves humanity. He creates and build leaders everyday. He hunts for talents with passion and grace. He loves other Nigerians . He loves Nigeria. These ’90s fashion trends are making a comeback in 2017