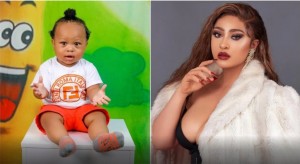 Sharing an adorable photo of her son on her Instagram page, Rosy Meurer said she’s counting down to his first birthday and can’t believe he would be one in a few days.

According to Rosy Meurer, she would offer an invitation to one of her fans who can guess the theme of her son’s first birthday, which would be taking place at Banana Island.

The birth of Rosy Meurer’s son is one of the controversies in the entertainment industry that people are never in a hurry to forget due to the speculation that she snatched Olakunle Churchill from Tonto Dikeh.

Counting down to my bay’s birthday. March 2nd a king was born. Can’t believe he’s 1 in a bit. It can only be God! I want to sent an invite to 1 fan. Guess King Churchill’s birthday theme to win yourself an invitation to his 1st birthday party in Banana Island.

Related Topics:Rosy Meurer
Up Next