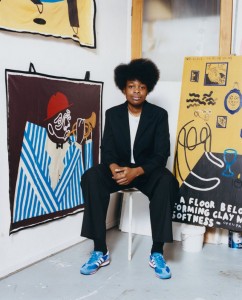 Two artists who use their craft to question social constructs and celebrate self-expression will be on African Voices Changemakers this week. The Cable News Network) CNN) magazine programme is sponsored by telecommunications giant, Globacom.

The 30-minute programme will feature Gonçalo Mabunda, a Mozambican and London-based Congolese, Joy Yamsangie who will both engage viewers with the interesting stories of their journeys to global recognition through their talents and skills.

Born on the first day of 1975, Mabunda is a visual artist and anti-war activist whose works have been exhibited  in important museums  including  the Center Pompidou in Paris, the Venice Biennale, the Museum of Art and Design in New York, Gangwon International Biennale, South Korea, the Museum Kunst Palast in Düsseldorf, the Hayward Gallery in London, the Mori Art Museum in Tokyo, the Johannesburg Art Gallery, the Tropen Museum, Amsterdam, Norway Army Museum, Netherlands Army Museum, Sweden Army Museum.

His works are fashioned out of deactivated weapons of warfare collected from individuals and communities earlier ravaged by a fratricidal war. His works are a sizeable part of a project termed ‘Transforming Guns into Hopes’ championed by a religious group in the country.

His colleague, Yamsangie dissects life’s complex issues including racism and sexism using traditional processes like drawing, painting and collage to produce works that proffer solutions especially to Congolese who struggle to fit into mainstream British culture. The artist’s works combine vivid colours, graffiti and illustrations to create a therapy that helps such people to express their social realities and expectations.